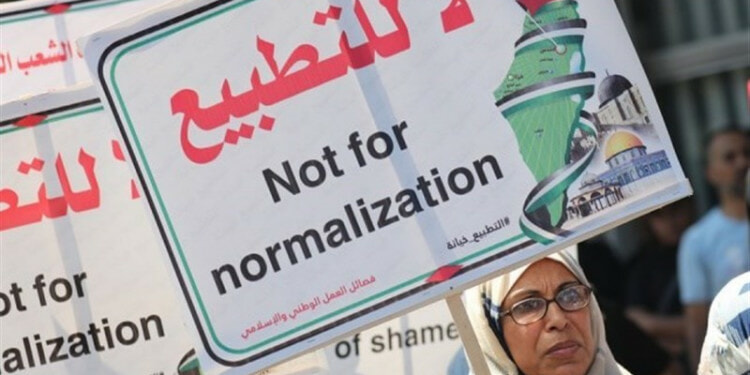 The announcement of the UAE and Israel deal has had a mixed reception, raising concerns about normalisation.

I approached Development Economist Mr. Riad al Khouri to find out his views since he is a well-known and respected specialist on the Israel-Palestine question. I asked him to explain his views on normalising relations toward Israel in the region and unpack the UAE -Israel deal for us. He told me what he believes are the processes and agendas which have led to this particular instance of “normalisation.”

Normalisation is a process in which particular attitudes or issues undergo a shift in a society wherein they become “normal.” What is normal and “acceptable” for the public at a particular point in time influences the decisions that politicians can make in policy-making. What is normal can be influenced by a number of factors — such as the dissemination of information, or tactics that include off-setting debates by presenting infeasible extremes.

In the case of Israel, efforts and steps toward normalisation are centred around narratives of peace, legitimising inflammatory decisions such as U.S. recognition of Jerusalem as Israel’s capital, and the “peace plan,” which was argued as one-sided and overly generous toward Israel.

Mr. al Khouri is a promoter for political dialogue with Israel. A Jordanian-Palestinian with Arabi-Israeli relatives living in Israel, al Khouri has a personal ties with the Israel-Palestine conflict, yet, his collaboration with the Interdisciplinary Centre Herzliya (IDC) has also positioned him at times as a “normaliser” of Israel.

Normalisation is a contentious issue. There are fears that normalisation of the Israel state will lead to more aggressive measures against Palestinian people’s rights and more conflict. Others, for example in the case of the UAE-Israel deal, believe that normalisation will create stability in the region.

It is difficult to determine exactly what is being normalised? Peace between nations or apathy toward Palestinian sovereignty? The consequences of normalisation aren’t certain but the fears and level of emotion of everyday Palestinians are understandable when considering the growing occupation of the west-bank, the threat of annexation and the continued excessive force of Israeli soldiers toward Palestinian civilians.

Yet, al-Khouri argues that normalisation is a necessary and inevitable process. However, he does draw distinctions. Whilst he believes that Israel has the potential to be a positive addition to the middle east, he is clear in his distinction between the potential of Israel as opposed to an Israel which is — “an American outpost with nuclear weapons and separation walls.”

This potential usefulness of Israel in the region, he says, is related to its technological capabilities and commerce possibilities. One example of this that he relates is the trilateral Qualifying Industrial Zones (QIZ) trade agreement, signed in 1998 by Israel, Jordan and the U.S. This aimed to allow Jordan to benefit from Israel’s free-trade agreements with the U.S. and for a time did generate large-scale cooperation between Jordan and Israel for the export of garments produced in Jordan to the U.S. market.

He also distinguishes between three types of normalisation. He identifies himself engaging in a type of “white normalisation,” one which endeavours to open a political dialogue. He contrasts this to a kind of “black normalisation,” a highly problematic approach typified by the willful ignorance of what is a deeply complex and urgent issue.

For al Khouri, those who choose this approach are doing something wrong. Celebrating Israel’s “great falafel” is an example of this, especially by those aware of Palestinian heritage. This kind of behaviour minimises the process of cultural appropriation. He comments that “one of the most sensitive and insulting things about this whole process is the way that the Israelis have co-opted all of this [Palestinian] cuisine — claiming it. That is really another level of nonsense.”

Cultural appropriation, which in this instance is the appropriation of Palestinian cuisine by Israel, is no small thing. As history professor Lawrence Davidson, in his paper “cultural genocide” so emphatically writes, it is one of the techniques used “to ‘Hebraize’ the territory now called Israel.” It is an issue which adds great insult to injury for the Palestinians and has been argued as a conscious political policy of the Israel state.

Lastly, al Khouri distinguishes a “grey normalisation” process. Grey Normalisation occurs when “there is a grave and immediate and ecological threat and people are forced to set aside their normal prejudices.” Al Khouri gives the example of the Red Sea-Dead Sea collaborative project between the Palestine Authority, Israel and Jordan, organised by the World Bank.

The project has received scepticism from environmentalists and Middle East water specialists yet the World Bank hopes that it could grow into a symbol of peace for the region. What will transpire from such an agreement remains to be seen, but al Khouri’s point is this — that in order for this scheme to have success, there must be normal and functional relations between Israel, Jordan and Palestine, ergo becoming a process of normalisation.

But, if the UAE-Israel deal is a process of normalisation, what kind of normalisation is this? And what are the motivations for the UAE to engage in a deal that has been met with so much criticism from the Arab World?

The first point Mr. al Khouri is clear to put forward is that Israel’s deal with the UAE differs from its deals with Egypt in 1979 and Jordan in 1994. Unlike with Egypt, the peace deal is not needed for the purpose of ending the war and unlike Jordan, the UAE does not border with Israel nor does it face the same economic conditions as Jordan does that it can “metaphorically have its arm twisted for pecuniary reasons.” Al Khouri also explains that in the case of Jordan, the peace treaty may exist for commerce but that, “emotionally and viscerally is 99% anti-normalisation toward Israel”.

What is happening in the case of the UAE is, as al Khouri puts it, “something else” and this something else, he says, “involves Iran,” as well as the UAE seeking to “consolidate their position vis a vis the Americans who are their protectors.” It is, therefore, a matter of securitisation for the UAE, related to paranoia toward Iran and a desire to buy Israeli stealth jets, which has motivated the UAE to consolidate Israel and U.S. relations.

To make the deal more “palatable,” al Khouri explains, the UAE and Israel have dressed up the deal as a “grey normalisation” kind of deal, i.e., the COVID-19 vaccine argument which is being put forward. Arguably, the claims that this deal will cease annexation plans too could be in order to “dress it up” — as Prime Minister of Israel, Netanyahu has refused to confirm that annexation plans are, in fact, off the table.

According to al Khouri, this is all part of the U.S. strategy and is linked with their desire to pull out from the Middle East and “pivot to the Indo-Pacific theatre.” It has been suggested recently that now that the U.S. has achieved oil independence, it no longer makes economic sense for it to remain involved in the Middle East and that it would make more strategic sense for the U.S. to now focus its attention on the Indo-Pacific region.

This strategy includes pushing the normalisation of Israel which al Khouri argues is due to the U.S. plan to leave the “security” of the Middle East in the hands of Saudi Arabia and Israel. A plan which he believes is not a good one, claiming that Saudi Arabia, despite its wealth, is in a fragile place and has shown itself “incapable of managing a war against Yemen,” currently losing despite having the upper-hand militarily. Israel, despite its technological capabilities, does not have the political intelligence and is in what al Khouri terms “a psychological ghetto,” their mentality making them more likely to fight the people they are supposed to be securing — a problem that has gotten worse over the years, he adds.

As al Khouri reminds, Mike Pompeo’s presence in Sudan has been in the hopes of persuading Sudan into normalisation with Israel. Earlier this year it was announced that Prime Minister Netanyahu met with Abdel Fattah al-Burhan, one of Sudan’s top military generals in Uganda, although the Sudanese government released a statement saying that it had not been notified about such a meeting. Economically vulnerable and isolated, Sudan has been in negotiations with the U.S. in relation to their removal from the list of State Sponsors of Terrorism. Sudan is now asking that the U.S. does not link Sudan’s removal from the list with its pursuit of normalised relations between Sudan and Israel.

Al Khouri neither explicitly condemns nor celebrates the UAE-Israel deal. His analysis of the deal suggests that it was a self-interested move by the UAE and that it is being driven by larger geostrategic aims of the U.S. He has expressed that normalisation is an inevitable process yet has stressed that the methods and motivating factors which drive a normalisation process matter.

As for concerns raised about the effects the deal will have on plans for a two-state solution, he explains that in his opinion the two-state solution would not be a good plan at any rate going forward, expressing concerns about corruption. He points to a confederation between Israel, Palestine and Jordan as a feasibility. The idea of a Palestine-Jordan confederation or Israel-Palestine confederation have been floated around. A confederation between the three nations has been less voiced, yet it has previously been put forward as a viable idea during Prime Minister Ehud Barak’s term — an idea which would depend on his “courage and vision to lead Israel toward a new era of peace and cooperation with its neighbours”.

As always, however, U.S. influence must be considered. As al Khouri says, “the Israelis will not do anything without the green light of the U.S.,” words supported by this year’s reports that annexation plans were halted at Trump’s request. Therefore, whether deals with Arab states will encourage Israel to go forward with such courage and vision, breaking away from current psychological constraints, or at least restrain Israel from policies which harm Palestine, such as annexation, may depend much more on the decisions of the U.S. But, as the U.S. approaches election time, the worrying possibility is that it is the attitudes and behaviours of the Trump administrations which have become the new “normal.”

Ukraine Crisis: Could A War Be Coming?

Voting Rights in America: Where Are We Now?