Madagascar on the Threshold of First Climate-Induced Famine

The worst drought in 40 years has left an estimated 30,000 people experiencing the highest internationally recognised level of food insecurity 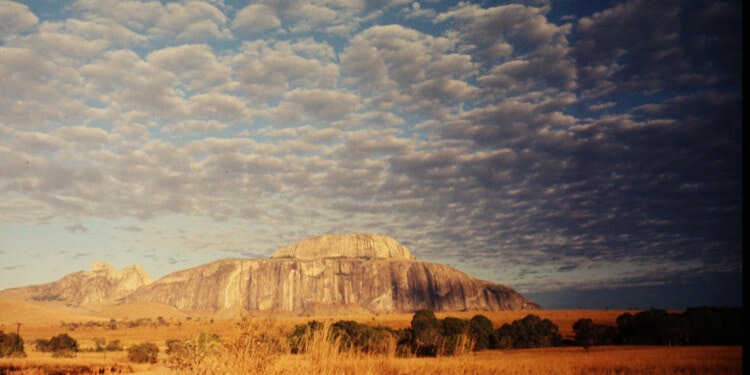 Madagascar, one of the lowest carbon emitters in the world, is suffering at the hands of climate change. The UN has said that the famine is likely to “go down in history as the first brought on by extreme and unusual weather conditions.” The country has not had sufficient rainfall for four years and the future is very uncertain.

Madagascar is home to a wealth of unique ecosystems

Madagascar is one of the most biodiverse countries in the world. Its ecosystems include a variety of forests, savannah, steppes, rivers, lakes, wetlands, mangroves, drylands, and reefs. In 2020, the Convention on Biological Diversity reported that more than “18 million people [in Madagascar] are dependent on biodiversity for their subsistence needs, with 80% being essentially entirely dependent on natural resources.” The country’s biodiversity has been suffering at the hands of destructive human practices for decades, including the clearing of natural habitats, hunting, and overexploitation of natural resources.

Sky News investigates how babies are slowly dying of hunger due to the climate crisis in Madagascar's Grand Sud.

However, the biggest threat to the country is the impact of climate change. Extreme changes in weather patterns have led to the biggest drought in decades. In many parts of the south of the island, dams have nearly dried up and people are being forced to dig deep holes for access to water. The dryness has affected livestock’s access to water, which has led to poor livestock body conditions as many are surviving on burnt cactus leaves instead of green pastureland. Many areas of the island have experienced failed harvests that have led to extreme food insecurity.

As a result of climate change, a country known for possessing unique ecosystems and biodiversity can no longer sustain itself. 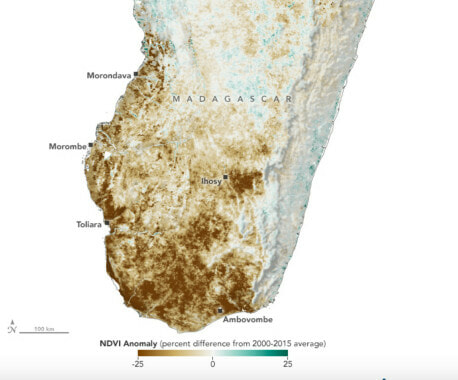 Children are most at risk from the famine, with millions malnourished. Rivo Razafison, the chief nutritionist at UNICEF, has said that many of the sick children he sees are being hospitalised because hunger has left them weak and prone to disease.

The population continues to rise by nearly 3% each year and families are struggling to feed their children. The country has the world’s fourth highest rate of chronic malnutrition, with almost one in every two children under five years of age suffering from stunted growth. This has a knock on effect on levels of education amongst children and it has been reported that an estimated 1.4 million children dropped out of primary school in 2012.

Related Articles: Humanitarian Crisis in Yemen Has Millions ‘One Step Away’ From Famine | Is $100 Billion in Climate Finance Enough to Offset Climate Damage? | Energy Consumption in the Developing World by 2040: Implications and Goals

Madagascar has among the highest poverty rates in the world

According to The World Bank, 75% of Madagascar’s population was living below the international poverty line of $1.90 as of 2019. Whilst there are no official figures for 2021, this number is likely to have increased as a result of the economic and social impacts of the pandemic. The country’s human capital index ranking is one of the lowest globally. Before COVID, the World Bank predicted a GDP growth of 5.2%. However, Madagascar’s GDP shrank by 4.2% instead.

The majority of people living in Madagascar do not have access to electricity and burn almost no fossil fuels. So how is it fair that these people are suffering the most at the hands of climate change? Whilst world leaders meet at COP26 to discuss the impacts of climate change, millions in Madagascar are in need of urgent humanitarian aid as a result of climate-induced starvation.

It is hugely important that countries in the developed world take responsibility for the severe situations that developing countries are already facing. A long-standing promise from richer countries to smaller countries for $100bn a year in climate finance is yet to be fulfilled.

Madagascar is a case in point for the speed at which this promise must be realised. Without aid, developing countries that bear the brunt of the environmental crisis brought about by the developed world will not be able to survive the impacts of climate change.

Unless world leaders deliver on promises to assist developing countries in climate battles, Madagascar might become the first country amongst many to suffer this fate.

Is Brazil “Greenwashing” Its Climate Record?

Is Brazil “Greenwashing” Its Climate Record?