The Leading Company Maersk Aims for a Solution 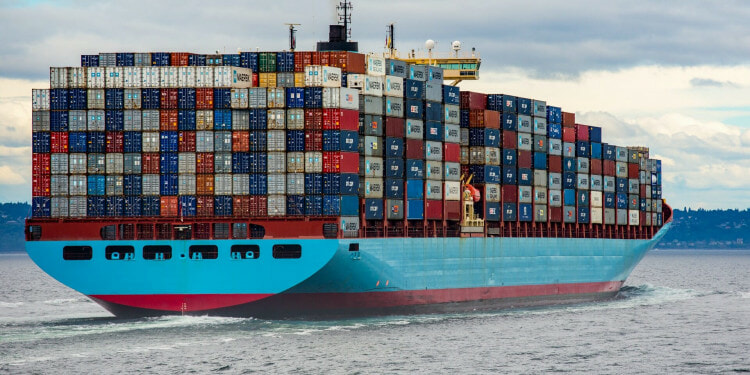 International shipping was responsible for 2% of CO2 emissions in 2019. This is because many cargo ships still use “bunker fuel”, the sludgy dregs of the petroleum refining process. It’s also loaded with sulfur, the chemical that, when burned, produces noxious gases and fine particles that can harm human health and the environment, especially along highly trafficked areas.

The noxious blend is dirt-cheap, making it possible to charge next to nothing to ship goods internationally. All of which means our unbridled consumerism hitches a ride on some of the dirtiest vehicles on earth. The industry’s reliance on high-carbon fuel poses a major stumbling block for global efforts to rein in pollution.

Maersk, the largest container shipping company in the world, aims to have a solution. They plan to run a ship on e-methanol which they claim is carbon neutral. Then, eventually convert the whole fleet to running on this energy source.

Unlike CO2 from fossil fuels, biogenic CO2 is not considered a greenhouse gas emission if it is from a sustainable source. Biomass sequesters carbon as it grows, and the CO2 released by combustion can be re-sequestered in the growing biomass. However, carbon sequestration takes time, so even with biogenic CO2, emissions and sequestration must be in balance.

Why is e-methanol a good sustainable fuel source for ships? Methanol is considered an excellent fuel, especially for ships. There are several reasons for this. It’s a liquid at room temperature, unlike LNG or pure hydrogen, which makes handling much easier. It’s water-soluble, which means that any leaks are quickly diluted and broken down in natural processes. Its use results in very low emissions of sulphur, particulates and NOx. Furthermore, e-methanol is “produced from renewable raw materials using green energy,” says Thomas Stenhede, Senior Technical Advisor at Liquid Wind, and also one of its founders.

The production to make the green e-methanol is done through teamwork between Maersk, Reintegrate, and European Energy to build a new Danish facility for the production of nearly 10,000t of carbon-neutral e-methanol. This is the expected annual requirement for the operation of the carbon-neutral liner vessel.

To produce e-methanol, the facility will utilize renewable energy and biogenic carbon. Maersk fleet and strategic brands CEO Henriette Hallberg Thygesen said: “This type of partnership could become a blueprint for how to scale green fuel production through collaboration with partners across the industry ecosystem, and it will provide us with valuable experiences as we are progressing on our journey to decarbonize our customers’ supply chains.”

Arguably, the problem is not close to a solution since production of the e-methanol is not scheduled until 2023. I feel this is far too late and needs to be much sooner with much of the planet experiencing the harsh effects of global warming. However, this is an important example of a big company like Maersk, a leader within its industry doing something constructive to fight global warming. The leaders of other industries should follow that example and lead the way on implementing renewable energies into their operations. From the largest airlines to the largest trucking companies. Hopefully, others will wake up and ramp up conversions to renewables much faster, joining our fight on global warming and climate change.

Nickson, The Startup Helping You To Relocate and Live More Sustainably

Nickson, The Startup Helping You To Relocate and Live More Sustainably