How Vietnamese Farmers Increase Their Profits From Cultivating Peanuts 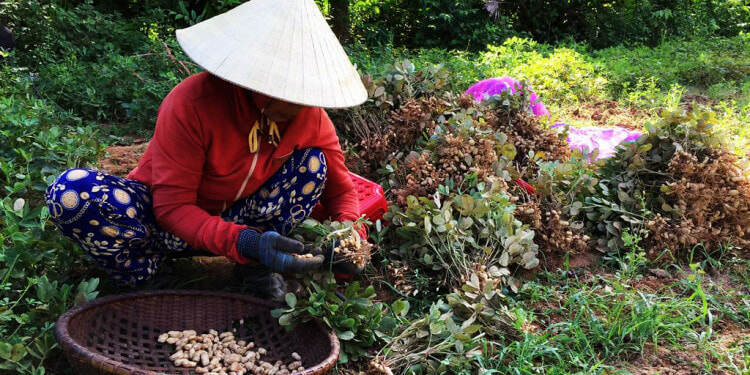 Research suggests that farmers in My Loi Climate-Smart Village in Vietnam can generate more profits from peanut cultivation by going organic.

In My Loi Climate-Smart Village (CSV) inorganic fertilizers are being applied in conventional peanut production to improve crop yields, often at the expense of the environment. Besides their environmental impact, these fertilizers are also contributing to greenhouse gas emissions, and thus to climate change. Agricultural stakeholders, including the CGIAR Research Program on Climate Change, Agriculture and Food Security (CCAFS), have been pushing for more practices that boost crop yields while protecting the environment. One such approach is organic farming.

Organic plots generated the highest profits although all three of them showed minor differences in terms of the other variables. Seeds from organic plots have also grown greener leaves and seemingly stronger plants than those with conventional treatments. No pesticide residue was found in organic plots, although the case was the same for the other two plots.

The benefits of organic peanut farming may be promising, but this is not an assurance that farmers will no longer return to their conventional methods. Overall, the participating farmers were positive about the outcome of this experiment. They showed a willingness to halt the use of inorganic fertilizers, pesticides, and herbicides if it meant less exposure to toxic chemicals, safer products, and fewer pollutants in the environment.

However, organic farming is significantly more expensive than conventional practice. The additional cost is mainly due to the labor that the farmers need to spend on manual weed control. The higher cost of going organic may lead to reluctance and even some resistance among farmers. What they need are stable market links and other forms of incentives to have their full buy-in.

On the policy side, the Prime Minister has signed several decrees that support organic farming in Vietnam. For example, Decision No. 885 / QD-TTg mandates the government to increase the agricultural land dedicated for organic farming by 1.5% to 2% by 2025 and 2.5% to 3% by 2030. Meanwhile, Decree 109/2018/NĐ-CP lays out the regulatory support required for organic farming. Creating these organic-only areas surrounded by buffer zones can help the government source organic raw materials and monitor organic standards easily.

The results of this experiment may be limited due to its scope, but nevertheless offer several benefits to the farmers and their environment. To scale organic farming in the Vietnamese agricultural sector, the government needs to enforce related policies effectively. Farmers may be tempted to return to their conventional ways if they are not incentivized to adopt organic farming. Incentives may include higher farmgate prices and more demand from consumers, which will increase their economic returns per hectare.

Editor’s Note: The opinions expressed here by Impakter.com columnists are their own, not those of Impakter.com. — In the Featured Photo: Farmer harvesting peanuts in My Loi Climate-Smart Village, Vietnam. Profits from peanuts can be increased by producing them organically. Featured Photo Credit: ICRAF-Vietnam.