For the second consecutive year, since 2020, Colombia is the most dangerous country in the world for environmental defense organizations and their staff 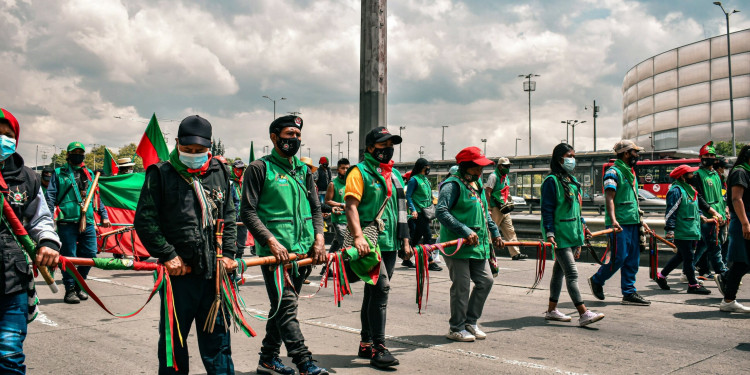 Since 2018, despite the truce with rebel groups, political instability has increased and the number of massacres in Colombia has not stopped growing, registering in 2020 the highest number since 2014. It has become the deadliest and most dangerous country for environmentalists worldwide as they and their organizations attempt to defend the country’s unique ecosystems.

Colombia is listed as one of the world’s mega-diverse countries. Because of its large number of ecosystems, being among all the countries of Latin America, the only one that boasts of having coasts on the Pacific Ocean and the Atlantic, it is one of the richest countries in species worldwide.

It also has a unique ecosystem: the Paramos, defined by AIDA (Interamerican Association for Environmental Defense) as “a variety of alpine tundra ecosystems located in the Andes Mountain Range, South America.” Only five countries in Latin America have Paramos, and 80% of that ecosystem is located in Colombia.

Paramos are very important in terms of water regulation as they are the main water supply for the cities in the country. They are also home to more than 456 species of mammals, making Colombia the first country in the world in terms of number of species of birds and amphibians and the third in number of live animal species.

Deep in the Amazon rainforest, in the mountains, the paramos and on the coasts, environmental organizations and their staff are protecting their territories from the different threats they are facing.

“For years, land and environmental defenders have been the first line of defense against climate breakdown. Yet despite clearer evidence than ever of the crucial role they play, far too many businesses, financiers and governments fail to safeguard their vital and peaceful work.” Global Witness.

Violence against environmentalists in Colombia

Colombia has been immersed in a seemingly endless armed conflict. What began as a struggle between political parties in the 1950s has led to an incessant war that has bled the country for more than seventy years.

According to Justice For Colombia “More land activists were killed in Colombia during 2019 than in any other country.”

Revolutionary groups, paramilitaries and drug traffickers have been the main cause of a period of ceaseless violence for more than three generations.

Community leaders and environmental activists who have dedicated themselves to protecting the country’s territories from the destruction caused by mining, wood and oil companies, are threatened and systematically killed by armed groups.

These groups expand territorial control and threaten the lives of environmental leaders who defend their lands, natural resources, including oceans, rivers and forests. Most of the activists murdered were involved in protecting forests against deforestation, resource extraction and industrial expansion.

According to the report drawn up each year by the environmental organization Global Witness, Latin America continued having the highest number of deaths of environmentalists in the world by 2020.

65 environmentalists were killed in Colombia during 2020

Violence against environmental defenders in 2020 claimed the lives of 227 people worldwide and a shockingly high number in Colombia: 65 killed, the highest number anywhere. Consider the numbers around Colombia: Six environmentalists were murdered in Perú, 20 in Brazil, 13 in Guatemala, 12 in Nicaragua and 17 in Honduras. The report also notes that in Brazil and Peru, almost three quarters of the attacks took place in the Amazon region of each country – that is, in areas contiguous with Colombia.

Global Witness also found, “the COVID pandemic only served to worsen the situation across the country: official closures led to defenders being attacked in their homes, and government protection measures were cut back.”

Regardless of the signing of The Colombian Peace Agreements in 2016, Colombia maintains its dreadful record on violence towards those who organize protection of natural resources.

Most of the killings of environmental leaders “took place in the context of widespread attacks against human rights defenders and community leaders across the country, which the United Nations Environment Programme has classified as endemic violence.”

According to the Environmental Justice Atlas, Colombia has the third highest number of environmental conflicts in the region. Colombia’s protected areas are in danger; it has the most deforested sites in the entire Amazon Basin.

The major driver of deforestation in the Colombian Amazon and in many other parts of this country and South America is the expansion of cow pastures. 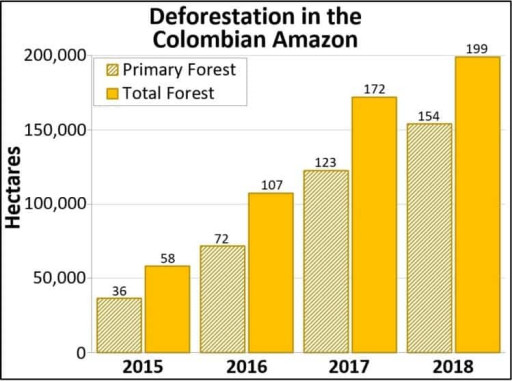 Deforestation in Colombia dates back to the time of colonization and is explained from a bellicose context. As the Ecologist, an environmental news and analysis website with a focus on environmental, social, and economic justice, explains it:

“The original colonizers and deforesters of the Colombian Amazon were rubber planters in the early twentieth century, who enslaved tens of thousands of local Indigenous people, causing incalculable long-term biocultural damage. They were followed by migrants that fled a civil war between Liberals and Conservatives in the mid-twentieth century, an episode that laid the seeds for the formation of the FARC.”

Daniel Henryk Rasolt, an independent researcher and writer, in his article Deforestation in Colombia that assessed the overall situation, concluded:

“A nasty combination of new and old illegal actors violently compete for control of vast forested territories and highly profitable illicit industries. These illegal groups fight against or work along with the interests of speculating multinational mining, oil, oil palm, agriculture, timber and construction corporations. All of these groups are vying for control of new land to title, exploit, or both.” 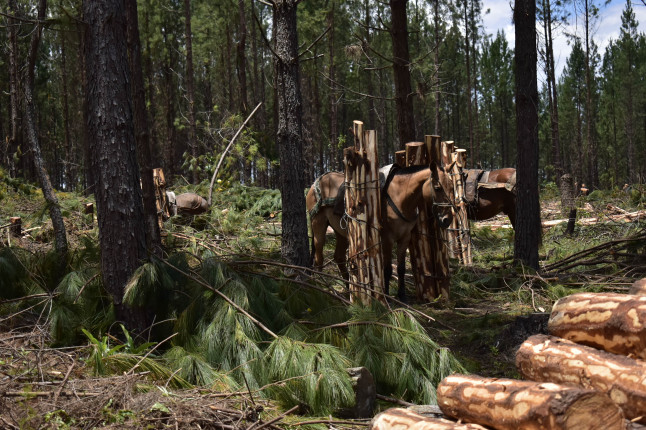 “Municipality of Cajibío, in northern Cauca: indigenous and peasant communities are fighting a battle to recover ancestral territories that have been taken away from them by armed groups and on which the Smurfit Kappa company has been established for several decades.” Source: Alejandro Hernandez, Colombian photographer.

“Land is power in Colombia, and the struggle for land has been the main driver of conflict, displacement, death and environmental destruction for many decades.” the Ecologist.

On the other hand, although during the political campaigns the current president of Colombia, Iván Duque guaranteed that there would be no fracking in the country, he signed the first contract starting the first pilot program in the country for oil extraction through fracking.

Even though environmental leaders have expressed strong disagreement, the project will be carried out in unconventional fields and the government plans to expand nationwide by the end of 2022.

As reported on Impakter in a previous article, Colombia’s President is ignoring the climate crisis and has no interest in defending the environment, much less the fragile Amazon ecosystem: “​​Notwithstanding the ongoing legal challenges in national courts, the company [Ecopetrol] has been given permission to proceed with the implementation of the programe galvanizing opposition movements against fracking, which environmental activists have linked to water contamination.”

Finally, aerial spraying has been the government’s tool to eradicate illicit crops. The aspersion was suspended by the Colombian Constitutional Court in 2017, until the government did not comply with six assumptions that would guarantee the protection of the environment and the health of the community.

“The possible return of glyphosate, fear of increased deforestation, non-compliance with court rulings that protect nature and violence against leaders were some of the most complex issues of 2020 and where the balance is not positive.” Said Mongabay, an independent media on environmental journalism in Latin America.

Despite the statements made by Iván Duque at the COP26 Climate Summit in Glasgow, Scotland this past November, where he once again declared himself an environmental advocate, according to Indepaz figures, nine people have already been killed in the first 23 days of January.

Four leaders have been killed in the Pacific region, three in the Orinoco region, one in the Amazon and one in the Andean region.

One of the latest environmentalist murder news in Colombia that shocked the world, was Breiner David Cucuñame’s, a 14-year-old indigenous child guard who was killed by an armed group in northern Cauca on January 14. He was part of the student Indigenous Guard and an environmental defender.

“Many groups arrived to clear land and forests. He told me about the disaster of cutting down forests to make money, his concern was water and he said that if we were going to let ourselves be invaded by coca.” His father said in a radio interview.

The communities constantly denounce the threats but Colombian authorities make no progress in protecting them. “There is a link between armed violence and the economic development model, that makes Colombia the country with the most murdered environmental leaders. There is no possibility of accessing justice and when we do, it is slow and ineffective.” environmentalist Francia Márquez told El Pais.

For decades, land and environmental defenders have been the first line of defense against climate breakdown. Despite clearer evidence of the vital role they play, too many businesses and governments are failing to safeguard their important and peaceful work.

Even though Colombia is ranked as the most dangerous country for environmental defenders, they continue fighting to save ecosystems, land, water and life.

More than 110 platforms, processes and environmental organizations protested asking for the vindication of the main environmental struggles in the framework of the National Strike of 2021 in Colombia.

The fight continues, and as the Global Witness says: “Inspired by their bravery and leadership, we must push those in power – businesses, financiers and governments – to tackle the root causes of the problem, support and safeguard defenders and create regulations that ensure projects and operations are carried out with proper due diligence, transparency and free prior and informed consent.”

The difficulties for Colombian environmental leaders are evident, but they are still committed to the defense of the environment, to continue preserving the country’s biodiversity, and to protect, maintain and conserve ecosystems and species – thus contributing to the commitment they have made to fight climate change.

In the Featured Image: Indigenous and Afro communities moved from their lands in the west of the country to the capital in response to President Iván Duque’s refusal to go to the territories to listen and discuss the demands and guarantees of the community’s rights. Source: Alejandro Hernandez, Colombian photographer.

How to Make Seeds from Fruits and Vegetables at Home

Born in 1995 in one of the most biodiverse countries in the world, Colombia. Student of social communication and journalism at the University of Quindio. She has participated in several radio projects, short films and documentaries in the coffee region in her country. She was part of the UN refugee agency as an intern. Feminist and human rights defender, she is passionate about radio, sports, music and traveling. Loves working for projects that generate social/environmental changes. 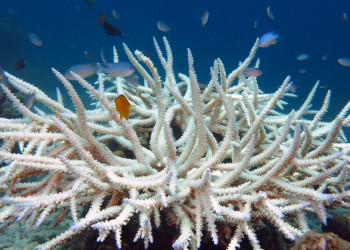