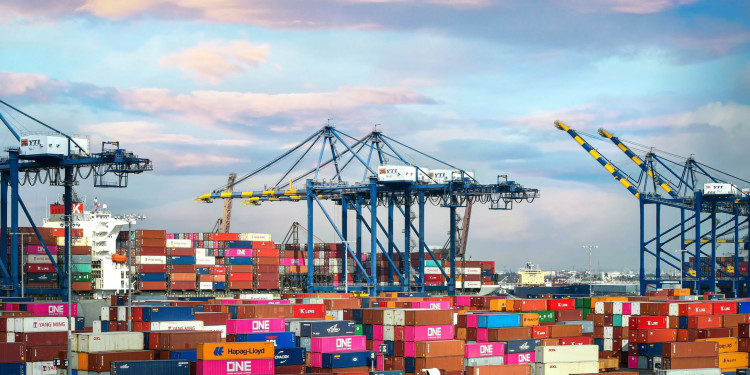 Southern California is dealing with a record number of container ships attempting to come through the Los Angeles-Long Beach Port. The ships are stuck in the waters outside the port waiting to unload their cargo.

Multiple factors are contributing to the bottleneck this week at America’s busiest port complex. A shortage of trucks and drivers to pick up goods, coupled with an overwhelming demand for imported consumer products led to 62 container ships waiting offshore as of Wednesday.

The back-up of vessels is increasing, last week saw 60 cargo ships waiting to unload. On Sunday, there were a record 73 cargo ships waiting to enter the ports. This puts marine traffic at the highest point it has been and all signs point to the jump being related to the growth of consumerism throughout the U.S.

“The Americans’ buying strength is so strong and epic that we can’t absorb all this cargo into the domestic supply chain,” Gene Seroka, the port of LA director, told CBSLA.

The pressure in the Los Angeles-Long Beach port can only be appreciated when we realise this is the ninth largest port in the world and is a vital gateway for products imported from Asia.

Between the ports they are responsible for 40% of container imports in the U.S. and 30% of the exports. This port is invaluable and the back up they are currently experiencing is placing a magnifying glass up the Americans unequal relationship with supply and demand.

As the holiday season approaches it is almost certain shopping trends will spike. The port is already setting new records for ships in port almost daily and that number is not expected to decline in the coming months. Reports suggest traffic has been steadily increasing since last summer due to a pandemic-induced buying boom that created a backlog at both ports and overwhelmed the workforce, some of whom were themselves recovering from Covid.

When the surge began Mike Podue, president of the International Longshore and Warehouse Union, Local 63, shared on the unions website “We’re a full year into a global pandemic, and longshore workers have seen both record-breaking cargo imports and the heartbreaking deaths of our colleagues. These losses connect us all on an emotional, visceral level.”

The impact of the pandemic upon the global supply chain is hard to gauge but certainly huge. Pressure from the surging demand has landed on suppliers and has led to shortages of goods and containers while also increasing costs for consumers.

Robert Garcia, the Long Beach mayor, announced this week that the southern California ports are working alongside the Biden administration and the transportation department in their attempts to reduce delays for ships.

In an effort to ease the historic cargo surge in the San Pedro Bay, Total Terminals International container terminal at the Port of Long Beach has begun a new pilot program offering 24-hour cargo pick up.

Read more about the program on our website: https://t.co/uaQ3Bt6mBh pic.twitter.com/ezblOrFReF

The ports announced this week that they would expand their hours for cargo pickup, with Long Beach experimenting with a 24/7 pilot program..

“The port of Long Beach is prepared to take bold and immediate action to help the supply chain move the record cargo volumes that keep our economy moving,” said Mario Cordero, the executive director of the port.

It is clear from the current situation facing the ports in Los Angeles and Long Beach that consumer demand remains on the rise and evidence suggests it is now at a higher level than during the pandemic – probably boosted by a need to “catch up”.

How long it will take for the backup to clear and the cargo ships to be able to unload is unclear, the situation will have to continue to be monitored. It is likely that, as the holiday season approaches, staff aboard the cargo ships and at the port will experience higher levels of demand than ever before.

Whether this new programme of 24/7 cargo pickup is the solution to tackle the imports boom will be tested in the coming months. We will simply have to wait and see if this water traffic jam clears up.

Aimee obtained her Masters degree in English Literature from Ulster University. She is passionate about feminism and social justice. Having specialised in the Brontë’s at university, Aimee’s enthusiasm for the written word grew and it is there she realised she would like to pursue her own writing. She also freelances at a Media and Publishing company tackling social issues for Gen Z.