With his legislative agenda presently stalled in Congress, will Biden regain his ‘steady hand’ image, or lose his legacy to the pitfalls of a divided party? 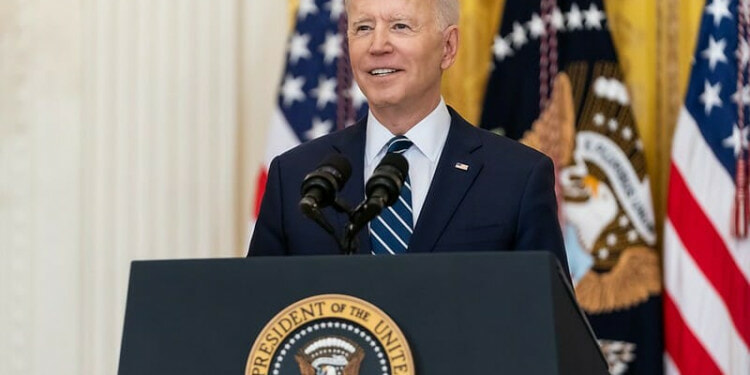 When Joe Biden assumed the presidency in January, he faced a daunting to-do list. From restarting an economy devastated by a global pandemic, vaccinating hundreds of millions of people, rebuilding America’s standing in the international community, to gaining the trust of a divided electorate – the list went on.

Nevertheless, early in his presidency, Biden appeared to hold up his end of the bargain that likely got him elected in the first place- not being Donald Trump.

Now, just over 250 days since he took over the White House, the Biden presidency has reached a critical juncture. With a stalled legislative agenda, a fractious party, and the spectre of Trump still controlling much of his opposition in Congress, countering with clear progress will be his only chance of avoiding an electoral disaster in 2022 – one that would effectively spell the end of a Biden presidency four decades in the making within its first two years.

Prior to the president’s Afghanistan-fuelled summer freefall, Biden was forging ahead with a clear agenda of rebuilding his nation’s standing in the international community whilst leading the United States out of its COVID-19 recession. Although previously stating that he saw himself as a “transition candidate” during his 2020 presidential campaign, his tenure began in objectively bold terms, resembling the steady and competent hand he had promised in his run for the White House.

He passed a landmark coronavirus relief package in March, re-introduced the United States onto the world stage by rejoining the Paris Climate Agreement and the World Health Organisation, and the early stages of his infrastructure agenda were progressively moving through their necessary phases to become what was supposed to be his defining domestic footprint.

However, all good things must come to an end – and in Biden’s case, far sooner than he would have anticipated.

His once historically consistent presidential approval ratings tell the tale of a leader in decline. In his early days in the White House, Biden enjoyed a +19 point approval rating, and his administration was on a stable course propped up by majorities in both houses of Congress. Now, after a midsummer rampage of crises and missteps, this number has dropped drastically to -4%.

Perhaps even more worrying, a recent Harvard-Harris poll has Biden’s predecessor and potential 2024 opponent Donald Trump now registering a higher approval rating than his among the American electorate.

What has led to Biden’s sharp decline in the eyes of the American people? There are a few contributing factors.

The 78-year old’s early successes in stunting the spread of COVID-19 were halted by a surging delta-variant, whilst persistent anti-vaccination movements across the nation have blunted the efficacy of his coronavirus vaccine rollout. His image as ‘consoler-in-chief’ during challenging times has been upended by mistreatment of migrants at the Mexico border, an issue he had pledged to fix, whilst America’s abrupt withdrawal from Afghanistan led to Saigon-esque optics for his administration and sparked relentless questioning of his decision making.

As Biden’s first year comes to a close, its final months will dictate whether the president will be able to regain his ‘steady hand’ image, or lose his legacy to the pitfalls of a divided party and a doomed legislative agenda.

To avoid the latter, President Biden desperately needs a win.

Turning the page on his summer slump will be vital to giving the Democrats a fighting chance at keeping control in next year’s critical midterm elections. Failure to do so would mean the end of much of Biden’s agenda, and a shift towards everything Republicans have been pushing at the state level – from installing voting limitations, restricting access to abortion, to an ending of any form of climate action.

Where is Biden looking for this win? His landmark infrastructure agenda, the passage of which will require overcoming unsparing opposition in Congress and divisions within his own party to save his first year- and likely his next three.

One side of Biden’s infrastructure agenda, a $1 trillion, bipartisan bill to update the nation’s physical infrastructure such as roads and bridges, has already passed through the Senate. This legislation would appear to be the one more readily destined for success, if only it could pass the Democrat-controlled House of Representatives.

However, “progressives” in the party have consistently stated that they will not vote to proceed with the bipartisan bill until a more ambitious, moderate-opposed $3.5 trillion ‘human infrastructure’ package is moved on in the Senate- a bill legislating across the economic spectrum including healthcare and climate change.

The unprecedented size and scope of the bill has caused several Senate moderates to seek to greatly reduce its cost if they are to lend their votes. Given that the Democrats hold the most fragile possible majority in the Senate, a 50-50 split only broken by Vice-President Kamala Harris’ tiebreaker vote, the price-tag will almost certainly be watered down.

After a scheduled vote on the bipartisan bill on October 30 was postponed as progressives held their stance on rejecting it until their demands for action on the larger bill are met, the outlook is bleak for swift progress on the passage of the two-bill agenda.

Key swing vote Senator Joe Manchin of West Virginia wrote in a Wall Street Journal op-ed in September that Congress should hit “pause” on the human infrastructure bill negotiations, and he has since stated that he will not agree to the bill unless its cost is significantly cut down to $1.5 trillion.

Meanwhile, prominent progressive Alexandria Ocasio-Cortez has cemented that she and other liberal members of her faction in the House will not vote for Biden’s $1 trillion bipartisan infrastructure bill, unless they get a $3.5 trillion spending package too.

A sense of the importance of finding a deal with both sides and presenting progress to the American people has been tangible from the White House in recent weeks. Despite touting a confident message after meeting with the Democratic caucus on October 1, telling reporters that “it doesn’t matter whether it’s in six minutes, six days or in six weeks. We’re going to get it done,” there is no doubt that Biden understands the political consequences of failing to deliver on his mandate.

“We’re going to get it done,” President Biden said at the Oval Office following a critical meeting before the vote on the Build Back Better reconciliation package. https://t.co/VYy247hUaH pic.twitter.com/aMGntR25dP

The ideological chasm that exists within the president’s party has essentially allowed progressives and moderates to use Biden’s agenda in a match of political chicken, and unless an effective compromise is found, the president’s legacy will pay the price.

Adding to the complexity of the current dynamic in Congress, there is urgent pressure to raise the federal debt limit, currently sitting at a colossal $28.4 trillion, to avoid the first default in the history of the US federal government.

US Treasury Secretary Janet Yellen has warned that the federal government will exhaust its ability to pay its debts by October 18, by which time, if Congress has not raised the debt ceiling, the entire US economy would likely spiral into a recession.

Thankfully, Democrats in the house avoided a government shutdown by passing a last-minute stopgap funding bill on September 30, averting a crisis after government funding expired at the end of its fiscal year. The stopgap spending bill will only fund the government into December, but it will at least give lawmakers the chance to craft the spending for federal agencies and programs long enough to keep the government open.

The bill will also provide key funding to aid several of the crises that have plagued Biden’s first year, including supporting Afghanistan evacuees and those reeling from this year’s numerous natural disasters.

Whilst Democrats found an agreement to keep the government funded, their attempts to raise the debt ceiling in the same measure was thwarted by Republicans, who are keen to see Democrats raise it without any bipartisan support.

Thus, they will be forced to move forward using the same ‘reconciliation’ tactics currently being used to push the $3.5 trillion infrastructure package through Congress without a single Republican vote.

The hypocritical opposition from the Republicans, who raised said debt limit three times during the Trump presidency whilst adding nearly $8 trillion to the national debt, sends a clear message to Biden of the unconstructive dynamic he would face should the Democrats lose their fragile majorities in Congress at next year’s midterms.

When Donald Trump was president & needed to raise the debt ceiling, Democrats said: Yep, we get it. Now we are trying to cover the debts incurred during his administration. Today Republicans deliberately voted to sabotage our country’s ability to pay the bills. pic.twitter.com/EcPrnyZ2vi

The optics of failure would put a shadow on Biden’s mandate heading into the midterms, providing relentless ammunition to his Republican opponents that could prove to be the final nail in the coffin to the Democrat’s hopes of retaining control.

This scenario is something Republicans are likely to be already anticipating, considering the president’s party consistently loses Congressional seats in a midterm election.

In fact, since 1946, the average number of House seats lost by the president’s party is 25. This number rises to 37 when a president’s approval rating dips below the 50% line, and with Democrats currently holding just an 8 seat majority, Biden’s ever-falling 44.8% rating is ominous.

With history not on the president’s side, presenting any form of progress on his agenda will be crucial. Despite trillions of dollars lost in the negotiations on pressing issues important to the American electorate, particularly healthcare and climate change, traversing the numerous roadblocks on the route out of his presidential crisis and coalescing a divided party behind him appears to be the only option for Biden to rewrite the narrative on his stumbling legacy.