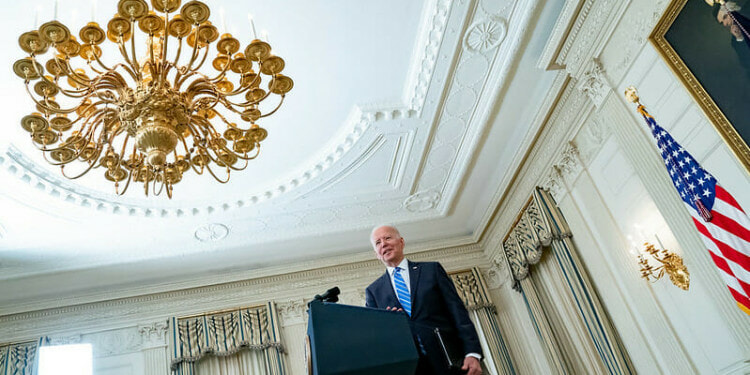 Embattled US President Joe Biden has attempted to utilise visits to hurricane-hit regions of the United States to change the rhetoric on his recent executive issues, pointing to the tangible consequences of climate inaction to stress the importance of bold climate policy and advance his pivotal infrastructure agenda.

Echoing the bipartisan sentiment that was a central theme of his successful 2020 presidential campaign, Biden used the opportunity to weave his infrastructure legislative package, currently in its home stretch in Congress, into the narrative of America’s recent extreme weather events.

The United States has been hit from both flanks over the summer, from wildfires with unprecedented spreads in the west, to a hurricane compounded by flash flooding on the south and east coasts. The effects of climate change upon worsening extreme weather events has perhaps never been more evident in the nation, and recent data has found that over 100 million Americans, or one in three, have experienced a severe weather disaster in 2021.

Over the past week, Biden has toured regions of the United States devastated by the effects of Hurricane Ida, reflecting similar messages of hope and resilience whilst promoting his domestic agenda as a solution to aiding storm-hit areas and softening the blow of future extreme weather events.

The President’s Hurricane Ida tour began with a stop last week in Louisiana, where the hurricane first made landfall on August 29 and resulted in the deaths of at least 15 people and caused power outages that are still ongoing in the state.

Biden’s subsequent visits to storm-hit regions were to the northeast on September 7, which included stops in New Jersey, where at least 27 people lost their lives, and the devastated Queen’s borough of New York, where a further 11 people died as a result of the hurricane.

Biden has approved major disaster declarations in six counties in New Jersey and five in New York, and is open to more according to White House spokesperson Jen Psaki.

Yesterday, I toured communities impacted by Ida in New Jersey and New York. As I told folks on the ground, we’re committed to supporting their recovery and to building back better with more resilient infrastructure. We won’t rest until the job is done. pic.twitter.com/BbK9je27tj

So far, at least 50 people are believed to have died as a direct result of Hurricane Ida, with flood-ruined streets and decimated infrastructure systems showing undeniable evidence of, as Biden put it, the “existential threat” of climate change.

President Biden has used the wake of Hurricane Ida to boost arguments for increased infrastructure investment, and the hurricane can provide an interesting perspective to the role that upgraded infrastructure can play in extreme weather events.

The storm made landfall 16 years to the day that Hurricane Katrina devastated the city of New Orleans, which tragically caused the deaths of over 1,800 people and cost over $100 billion in damages. The city’s flood protection infrastructure received a significant upgrade following the storm’s exposure of insufficient weather response systems, and around $14.5 billion was subsequently spent on New Orleans’ flood protection levees.

Ida was the system’s first major test, and whilst not perfect, it certainly proved the importance that improved infrastructure can play in such situations.

At the same time that the president was travelling to the northeast, the White House sent Congress an urgent funding request for $14 billion to aid recovery from natural disasters, and predicted that the total cost of Ida will require several billion more.

The Debate Rages Across the Political Spectrum

Biden has previously described his infrastructure package as one that will “transform America,” on the one hand looking to upgrade the nation’s outmoded physical infrastructure such as roads and bridges whilst on the other legislating on practically every corner of the US economy.

Biden’s infrastructure package has encountered shifting support throughout this year, with progressives expressing that the bipartisan bill does not go far enough, whilst moderates feel that the ‘human infrastructure’ plan is too expensive and pulls the president’s agenda too far to the left. But consensus may emerge as key lawmakers have indicated that the recent effects of Hurricane Ida, including flooded roads, failed power lines, collapsed bridges, and overwhelmed drainage systems, serve as prime examples of the necessity of Biden’s infrastructure platform.

For the President, now is the time to push ahead with his domestic agenda. In a speech in the storm-hit streets of New York, Biden described climate change as “everybody’s crisis”, warning that “the threat is here. It is not getting any better… the question is can it get worse. We can stop it from getting worse.”

President Biden on climate change: “You gotta listen to the scientists and the economists and the national security experts. They all tell us this is code red. The nation and the world are in peril.” pic.twitter.com/vPyqbee4L9

Several prominent lawmakers, such as Senate Majority Leader Chuck Schumer, clearly agree, as many see this recent catastrophe as the opportune time to prioritise the President’s two-bill infrastructure legislative agenda.

“Global warming is upon us…  when you get two record rainfalls in a week (in New York City), it’s not just a coincidence… It’s going to get worse and worse and worse, unless we do something about it” stated Schumer, adding “it’s so imperative to pass the two bills”.

With the effects of climate inaction growing ever more-evident, and the nation’s antiquated infrastructure in dire need of an upgrade, members of Congress on both sides of the aisle appear keen to push ahead at least with the bipartisan bill.

Louisiana Senator Bill Cassidy, a Republican and a lead negotiator on the bipartisan bill, told CNN that “if we’re going to make our country more resilient to natural disasters, whatever they are, we have to start preparing now,” adding that  “I’m sure hoping that Republicans look around my state, see this damage and say, ‘If there’s money for resiliency, money to harden the grid, money to help sewer and water, then maybe this is something we should be for.’”

For Biden, recent extreme weather events have provided an opportunity to show the necessity of improving the nation’s infrastructure systems. With the President’s potentially legacy-defining agenda nearing passage through Congress, whether it is approved in strong terms or watered down to appease moderates will be telling as to whether the lessons from Katrina have been learned on a nation-wide scale amid warnings of increasingly severe and frequent weather extremes.

How “Noble” Is the Nobel Prize?

Ukraine Crisis: Could A War Be Coming?

Voting Rights in America: Where Are We Now?